From Berlin to Rio in 80 Years: The Olympics and Race in the Toronto Sports Media in 1936 – “The Negro as an Athlete” 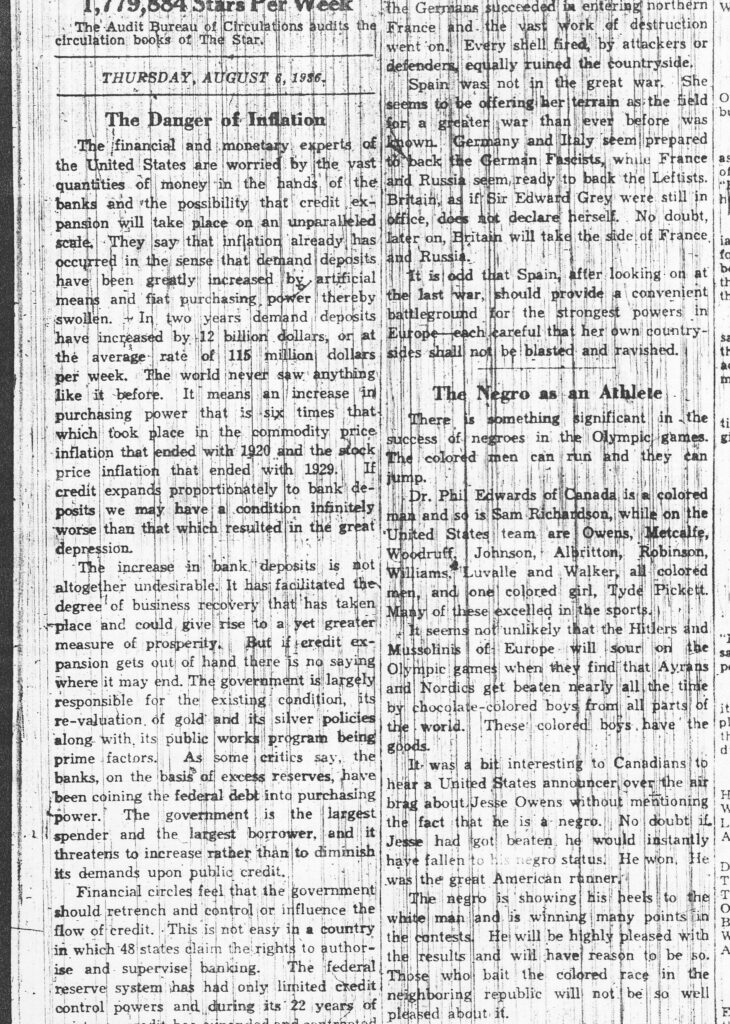 On the eve of the official opening of the 2016 Rio de Janeiro, Brazil Olympics, media reports are filled with stories about infectious water and air, social unrest and dangerous streets, Russian doping, and the risks of the Zika virus.

80 years ago, the context for Toronto newspapers writing about the 1936 Berlin Olympics was the rise of Hitler and Nazi Germany in a world clearly consumed with nationalism and race.

The sports pages of the Toronto Daily Star and The Evening Telegram from August 1936 reflect this.

Consider the Thursday, August 6, 1936 edition of the Toronto Daily Star.

In The Negro as an Athlete, the Daily Star column asserted that

“There is something significant in the success of negroes in the Olympic games. The colored men can run and they can jump.”

It noted that Canada’s team featured Dr. Phil Edwards and Sam Richardson, both “colored”, while listing nine (9) colored men, including Jesse Owens, and one (1) “colored girl”, Tyde Pickett, on the United States team. The Daily Star went on to state that “Many of these excelled in the sports.”

In gauging the reaction of the more virulent European nationalists to competition with capable colored folk, the Daily Star made a predicition:

“It seems not unlikely that the Hilters and Mussolinis of Europe will sour on the Olympic games when they find that Ayrans [sic] and Nordics get beaten nearly all the time by chocolate-colored boys from all parts of the world. These colored boys have the goods.”

Gazing south of the border, the column critiqued the American selective approach to glossing over the fact that Jesse Owens was a “negro” as it bragged about his victories. In fine, eternal Canadian style, the Daily Star chided its big American cousin claiming that

“No doubt if Jesse had got beaten he would instantly have fallen to his negro status. He won. He was the great American runner.”

Of course, how could the Daily Star have known that the Canaidan media would take a kindred approach 52 years later at the 1988 Seoul Olympics when a positive drug test transformed the then fastest man ever, Toronto 100-metre sprinter Ben Johnson, from a Canadian hero to “a Jamaican-born sprinter”.

Ultimately, the Daily Star assessed the effect of negro athletic success in the United States:

“The negro is showing his heels to the white man and is winning many points in the contests. He will be highly pleased with the results and will have reason to be so. Those who bait the colored race in the neighboring republic will not be so well pleased about it.”