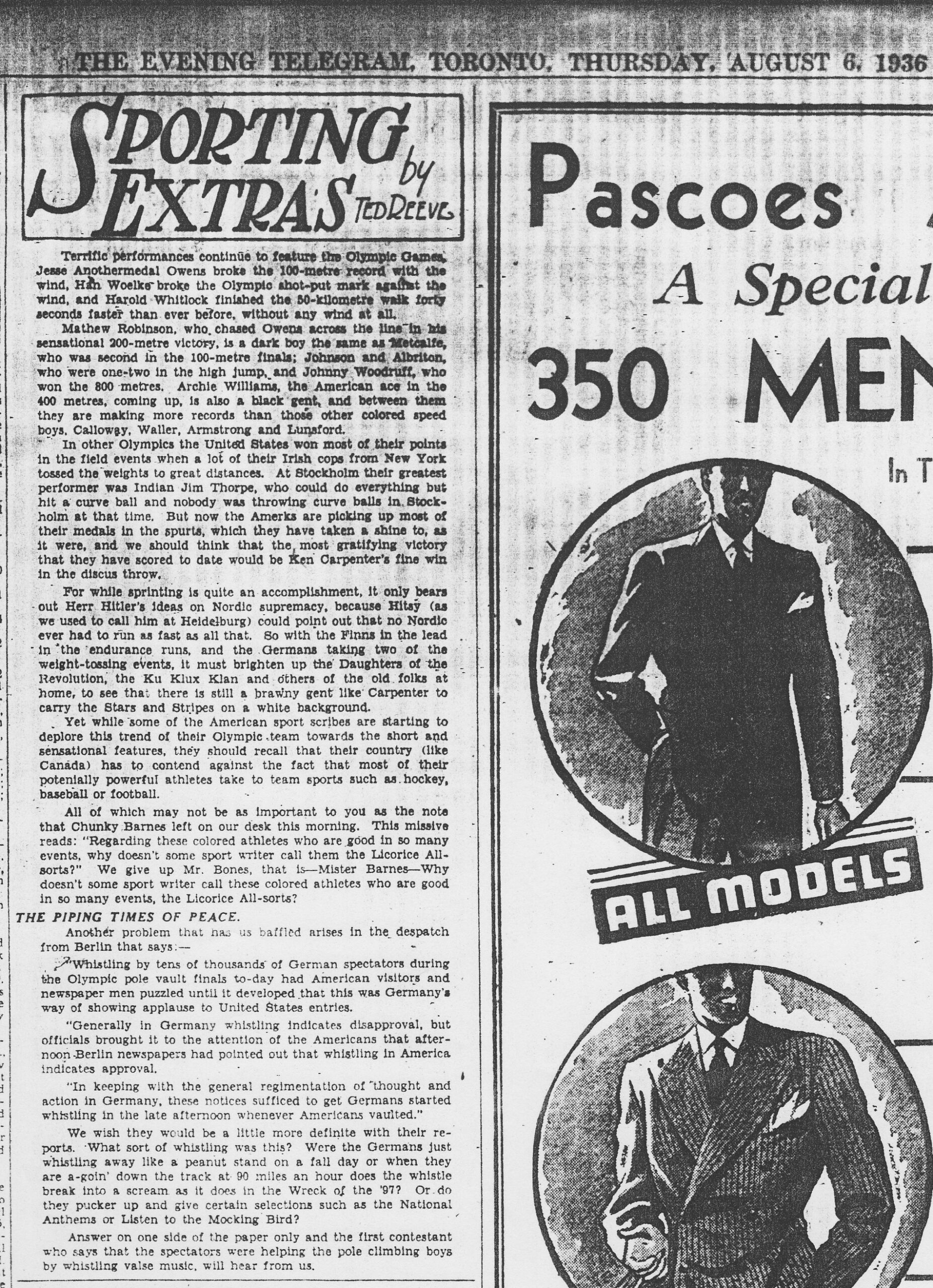 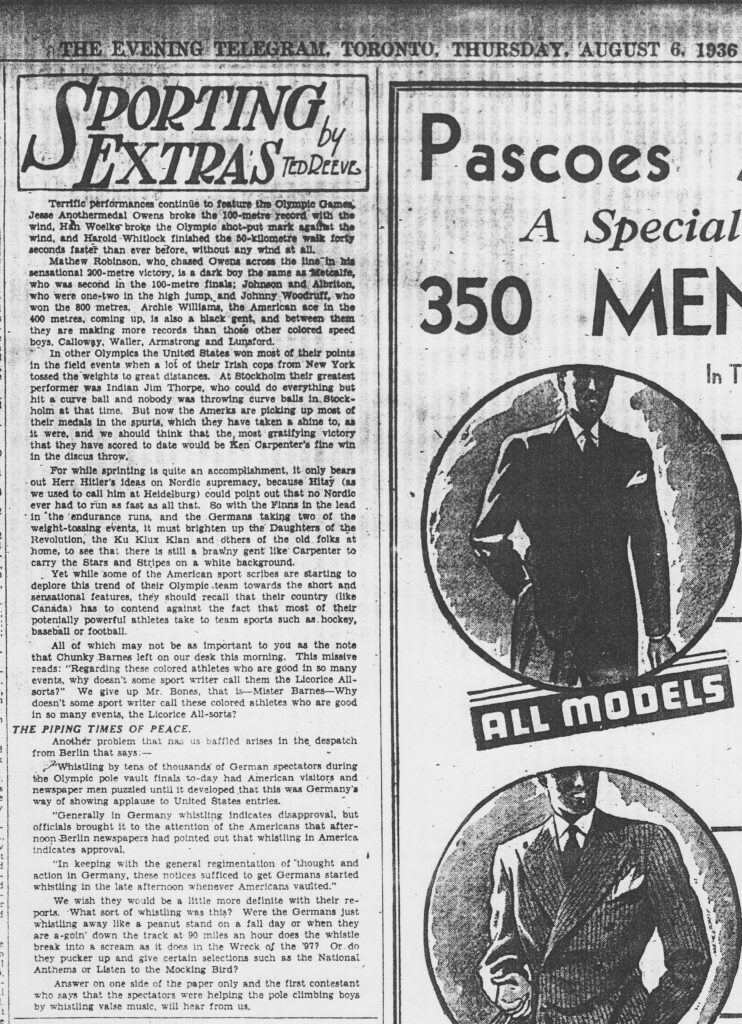 The 1936 Berlin Olympics was the “mega-event” that had almost been a non-event.[1]

The Nazi rise to power in Germany meant the party’s anti-Olympic perspective could have led the National Socialists to cancel the games themselves (Berlin was awarded the ’36 Games over Barcelona before the Nazi’s took power) or invite some in the international community who were “concerned with the fascists radical policies” to find a new venue or boycott.[2]

But the diabolical firm of Hitler and Associates ultimately appreciated the propaganda value of the Games. They were calculating in their presentation and filming of the Opening Ceremonies, enlisting Leni Riefenstahl as director.[3]

The media presence was precedent setting. As Samuel D. Smith put it

“One of the ways in which the Berlin Olympics built upon its 1932 Los Angeles predecessor was the scope of media coverage: the Games drew an unprecedented 3,000 or so journalists from television, radio, and print media, a fact that gave the Nazis’ mega-event a truly global reach.”[4]

Indeed, the Berlin Olympics were the first to use television.[5] If you were lucky enough to get into Hindenberg Hall in the Olympic Village or one of the seventeen to twenty plus other viewing halls in Berlin, you could watch the games live and in fuzzy black and white on the old Telefunken via closed circuit television (okay, Telefunken was involved TV technology back then but not sure if they made the monitors).

Toronto newspapers formed an interesting part of the global coverage.

In August 1936, he used his column to muse about, among other things, the successes of America’s black runners at the Nazi Olympics, how that success tracked with Hitler’s ideas on “Nordic Supremacy”, how the achievement of a white American discus thrower could be reassuring to the KKK and the like-minded, and the latest idea for a moniker to attach to “colored athletes” that would describe their blackness in the context of athletic achievement.

By the time the column went to press, top performances at the Games were ongoing. Reeve noted that

“Jesse Anothermedal Owens broke the 100-metre record with the wind. Han Woelke broke the Olympic shot-put mark against the wind, and Harold Whitlock finished the 50-kilometre walk forty seconds faster than ever before, without any wind at all.”

Reeve gave black athletes special attention for medaling across disciplines on the track and the field:

“Mathew Robinson [sic], who chased Owens across the line in his sensational 200-metre victory, is a dark boy the same as Metcalfe, who was second in the 100-metre finals; Johnson and Albriton, who were one-two in the high jump, and Johnny Woodruff, who won the 800 metres. Archie Williams, the American ace in the 400 metres, coming up, is also a black gent and between them they are making more records than those other colored speed boys, Calloway, Waller, Armstrong and Lunsford.”[6]

Irish policemen from New York and Jim Thorpe, the indigenous American of the Sac and Fox Nation, considered among the greatest athletes to ever walk the earth, were caught by Reeve’s Olympic scattergun commentary as he referenced the sources of past American Olympic achievement:

“In other Olympics the United States won most of their points in the field events when a lot of their Irish cops from New York tossed the weights to great distances. At Stockholm their greatest performer was Indian Jim Thorpe, who could do everything but hit a curve ball and nobody was throwing curve balls in Stockholm at that time.”

But, the columnist opined, all current American success in the “spurts” might well be adduced by the Fuhrer as evidence of Aryan superiority and, in all likelihood, Americans (presumably white Americans) and American sports writers (also presumed white) would rather see a great white hero achieve victory for Uncle Sam in events indicative of superior Caucasian evolution. Reeve, a veteran of WWI and future overage combatant in WWII, wrote:

“But now the Amerks are picking up most of their medals in the spurts, which they have taken a shine to, as it were, and we should think that the most gratifying victory that they have scored to date would be Ken Carpenter’s fine win in the discus throw.

For while sprinting is quite an accomplishment, it only bears out Herr Hitler’s ideas on Nordic supremacy, because Hitay (as we used to call him at Heidelberg) could point out that no Nordic ever had to run as fast as all that[7]. So with the Finns in the lead in the endurance runs, and the Germans taking two of the weight-tossing events, it must brighten up the Daughters of the Revolution, the Ku Klux Klan and other of the old folks at home, to see that there is still a brawny gent like Carpenter to carry the Stars and Stripes on a white background.”

Of course, no 1930’s Toronto sports columnist would be worth a damn without injecting a brown skin-tone descriptor for the “negro” athlete. “Tar”? Feels a little tired. “Chocolate”? Seems a tad cliché. “Dusky”?  Lacks in imagination.

Hell, what about a sweet, chewy, aromatic black substance from the Glycyrrhiza glabra plant used to make a tasty candy treat:

“Why doesn’t some sports writer call these colored athletes who are good in so many events, the Licorice All-sorts?”

[1] Samuel D. Smith, Ode to Peace or Prelude to War: The Opening Ceremonies of the 1936 Berlin Olympics as Political Theatre, page 28: (http://vanderbilthistoricalreview.com/wp-content/uploads/2016/01/Ode-to-Peace.pdf)

[5] Id. at 28, citing Maurice Roche, Mega-Events and Modernity: Olympics and Expos in the Growth of Global Culture (London, New York: Routledge, 2000), 1 at 113, 115; The History Place, The Triumph of Hitler: The Berlin Olympics (http://www.historyplace.com/worldwar2/triumph/tr-olympics.htm)

[6]On the subject of “colored boys”, it should be noted that when the white Reeve wrote his piece he was 34 years old and Robinson, the “dark boy” and older brother of baseball legend Jackie Robinson, was 22.

[7] In the evolution of the racial hierarchy as envisioned by the white supremacists Reeve references, presumably Nordic people in challenging environments used superior intellect and resourcefulness to avoid dangers and threats to survive, dispensing with the need and hence the ability to run fast maintained by less evolved types.