Digging Up the Time Capsule: Revisting a 20-year-old Assessment of the Canadian Sports Media’s Approach to Basketball

Back in 1994, on the eve of the Toronto Raptors’ birth, basketball coverage in the Canadian sports media was something less than copious and not exactly vigorous.

In the denouement of Toronto’s 2016 N.B.A. All-Star Weekend coronation, we can definitely say, “What a difference a couple of decades make.”

Arguably, back in 1994, there were obvious deficits in basketball reportage in Toronto and across the country.

Some of the themes and storylines legitimately made some wonder if the mainstream corporate press was ready, willing or able to analyze the game and fight through an ingrained hockey bias, or socially competent to deal with a bolus injection of African-Americanism into a Great White sports culture.

Almost 22 years later, undoubtedly Canadian media coverage of basketball on every level has multiplied many times.

Has the coverage matured as much in its other dimensions?

Consider a column I wrote in a Toronto weekly, originally published on June 30, 1994, entitled “Canadian Media Missing the ‘Hoop'”, and think about how you would rate the development of basketball coverage in Canada since the FIBA World Championships were held at Maple Leaf Gardens and the Skydome 1994 and the Raptors inception in 1995. 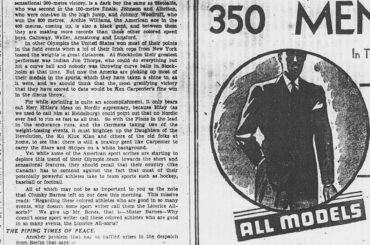