Despite the Catastrophic Consequences, Impaired Driving Causing Death Is Not Murder 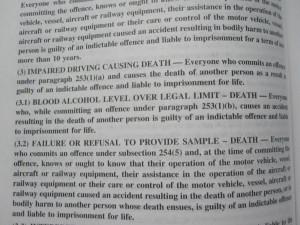 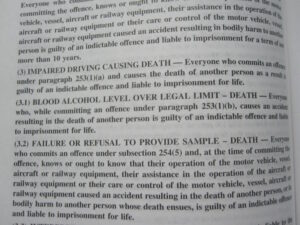 When a brother loses his sister and father to a drunk driver in the same collision that seriously injured his mother, the emotions are visceral.

The last thing he wants to hear is that his beliefs about the justice system, expressed through his anger and grief, are not completely well grounded.

Anyone can understand his fundamental personal disappointment at the 5 year prison sentence given when considered against the prosecutor’s submission that 8 years should be imposed.

However, grief and tragedy do not transform important principles into meaningless ideas. Subjectively senseless crimes do not bind the courts into ignoring the law. Characterizations of the criminal justice system by those left behind do not become facts simply because as human beings we can sympathize or even empathize with their loss.

Respectfully, when it comes to the punishing impaired driving causing death, taking a step back from the emotional grinder of the trial process reveals a few things.

2. Impaired driving causing death cannot be equated to 1st or 2nd degree murder. Fundamentally fair criminal justice systems need to distinguish deliberate behaviour designed and/or intended to kill from seriously reckless or grossly negligent behaviour that had the unintended tragic consequence of ending a life. Arguably, many Canadians and others would accept the idea that, for example, a sober person who carried out the orchestrated shooting of two family members is guilty of a crime with a different character than the alcohol-impaired individual whose criminal choice to drink and drive left him with unspeakably compromised driving ability that caused, without specifically intending, the terrible death of two family members.

3. The sentencing process is an individualized process and a broad set of relevant specific facts matter. Looking at only a couple key similarities can generate an expectation that sentencing in one case ought to be exactly the same as in another. As if it needs saying, the number of lives taken in a horrendous drunk driving case is absolutely relevant to the sentence the offender receives. But it’s not the only the thing. People in communities across Canada and beyond understand that the personal background an offender has a role to play in determining a fit punishment. Few would argue that the mature, middle-aged person may have a degree of responsibility beyond that of a teenager, the repeat offender with multiple alc0hol-related convictions cries out for a stiffer punishment than a first-offender whose conduct is shown to be out-of-character, or that the person who pleads guilty at an early stage can be credited for that act of remorse, which often saves resources and heartache, while the person who goes to trial and loses gets no such credit when being sentenced.

4. When looked at more widely over time, it appears Ontario sentences for impaired driving causing death have been increasing.[1] First offenders with no criminal convictions, no record of non-criminal driving offences, and comparatively lower blood alcohol levels, whose driving (during the incident) was objectively less reckless and killed a single person are receiving 4 and 5 year prison sentences.[2] Significantly, the Court of Appeal for Ontario, the province’s highest court, has expressly stated that 4 to 5 years is not the upper limit. The Court has imposed sentences of 8, 9 and 12 years in situations where offenders had several prior criminal convictions, multiple prior drunk driving convictions, existing court orders prohibiting them from driving at the time of the crime, driven without a driver’s licence, dramatically high blood alcohol levels, and/or had killed two or three people.[3]

A discussion about sentencing precedents and principles is hardly a balm for the emotional devastation within a family or a community dealing with consequences of impaired driving causing death. Further, a discussion about what the law is today does not preclude a conversation about whether Parliament should use its criminal law making authority to reset the sentencing framework for impaired driving causing death and enact minimum sentences for first and subsequent offenders, or establish codified aggravating factors which would operate to increase the duration of prison sentences.

However, while recent events make it clear that the people who truly bear the cost of the carnage associated with impaired driving causing death need to be heard, any reasonable discussion about these issues must consider protected constitutional rights and the legal balancing act required even in the midst of tragedy and outrage.

Caught Up in the System: For Empowerment, ...